The Life cycle of a New Zealand fur seal 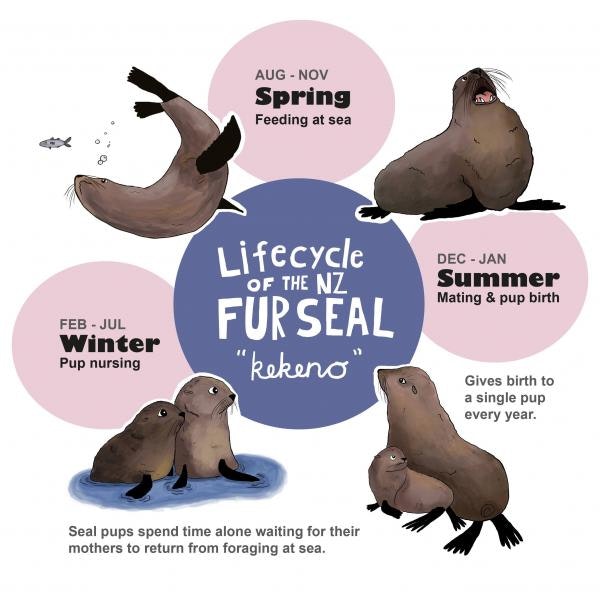 The New Zealand fur seal, also named “kekeno” is the most common seal in New Zealand. In the 18th century, these seals were hunted by European sealers for their fur and blubber, which almost drove them to extinct. Since 1894 the NZ fur seals have been fully protected by the Marine Mammal Protection Act. Today there are more than 200,000 fur seals and they thrive around the rocky shores of New Zealand.

December to January is the breeding season. The fur seals reach sexual maturity when 4 – 6 years old. The males, the big bull seals are the largest, and grows up to 1.6 m and can weigh up to 160 kg. They defend their territory by posturing and growling on the rocks, sometimes not eating for days because they are busy with their chest-to-chest power struggles in early summer.

The females reach 50 kg and grow up to 1.2 m. They give birth to a single pup every year and live for 14-17 years. They mate just 6-8 days after giving birth, but they can delay the implantation for 3 months, giving them a 9/12 months gestation period. 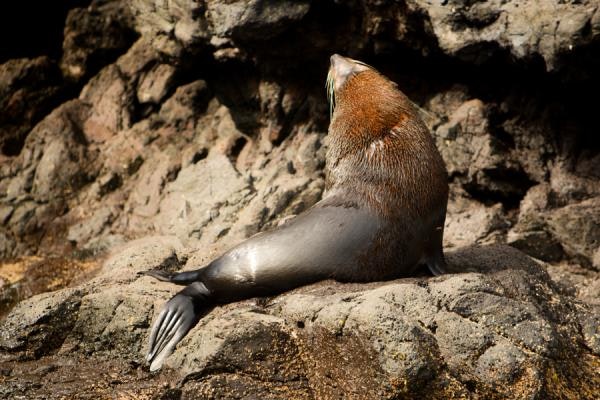 February to July is all about taking care of the pups. These a left onshore in the seal colony, playing together in large groups waiting for their mothers that are out feeding at sea. When the mother returns, she calls for her pup and it instantly responds and runs to her for milk. The mother can recognize the voice of her own pup among hundreds of others. 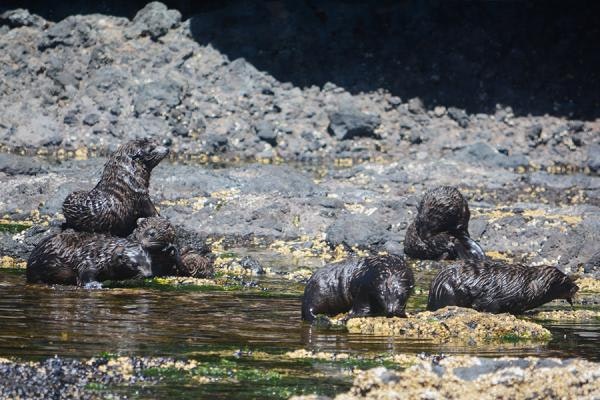 From August to November the pups begin feeding on the sea, swimming by themselves further from the colony. The main diet for the fur seal is squid, octopus and fish, especially lantern fish and barracudas. They can travel very fast underwater, up to 50 km/h, and can dive to depths of over 200 m. Fur seals have been sighted up to 1000 km out to sea. The fur seals are distinguished by having external ears and hind flippers which rotate forward, making them fantastic swimmers.

If you are close to rocky areas along the seaside in New Zealand, look closely for these wobbly creatures. They are very well camouflaged, having the exact same colour as the rocks they lie on - changing from light brown to almost black when wet. Adjust your eyes and you will suddenly see them pop up everywhere – The New Zealand fur seal – The “kekeno”. 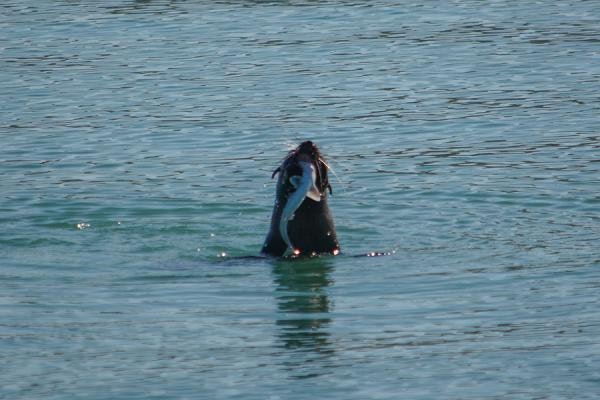 A young pup feeding by himself

The Life cycle of the female Hector’s dolphin

Donating $30,000 towards the Akaroa Hospital Rebuild