New Zealand waters are one of the largest marine territories in the world and we’re lucky enough to have a whale migrating route going straight through them, with almost half of the world’s whales and dolphin species being found around the New Zealand coast. We do not see whales regularly in or around Akaroa harbour, so we can not offer whale watching here. However, occasionally we have some rare sightings throughout the year on our nature cruises. If whale watching is on the top of your bucket list, the best destinations in New Zealand are; Kaikōura, Auckland’s Hauraki Gulf, Bay of Islands, Marlborough Sounds and Bay of Plenty.

On the other hand, over the last few years, we have seen an increase in whales over the winter months. They migrate north to the warmer waters between May & September, generally following the continental shelf, which is located 12 nautical miles off the coast of Banks Peninsula.

Humpback whales are the main type of whale we see on occasion, but over the years we have also seen Southern Right whales and Sperm whales outside Akaroa heads. See below for more information on these fascinating creatures, 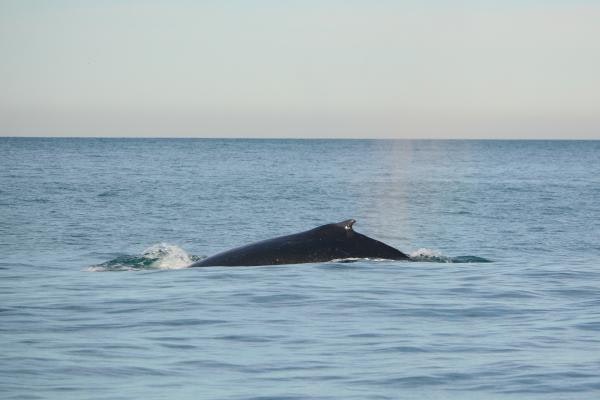 Other Characteristic: Generally slow-moving, spectacular breaching, tending to breathe every 20-30 seconds for two or three minutes then dive in their peculiar ‘humpback’ fashion, staying under the water for 3 to 28 minutes.

Life Cycle: Around 5 years old, both females and males are sexually mature. Breeding and calving then occur in winter, with gestation lasting 11 months, and the nursing of calves commencing for approximately 1 year. Females will typically give birth every 2 or 3 years.

Feeding Patterns: They eat small prey such as squid, krill, herring, pollock, haddock, mackerel, capelin, salmon and various other fish. Humpback whales have the most diverse feeding patterns, including lunging through patches of prey, stunning prey with their flippers & forming ‘bubble nets’. Then as a baleen whale, they surge through the water with an open mouth, filtering the krill and fish from the water through their baleen (long keratin plates hanging from the top of the mouth).

Migration: Nearing the end of autumn the Humpback whales start their annual migratory route. Heading up to the warmer tropical waters of the Pacific to begin their winter breeding/calving. Returning south in spring. These whales migrate around 5000km on average, one of the longest migratory journeys of any mammal on the planet. Travelling at an average speed of 1 km/hr, even though they’re capable of 8kms/hr. Humpbacks also like to rest and socialise along the way.

Fun Fact: They have the most complex & intricate whale song in the world! 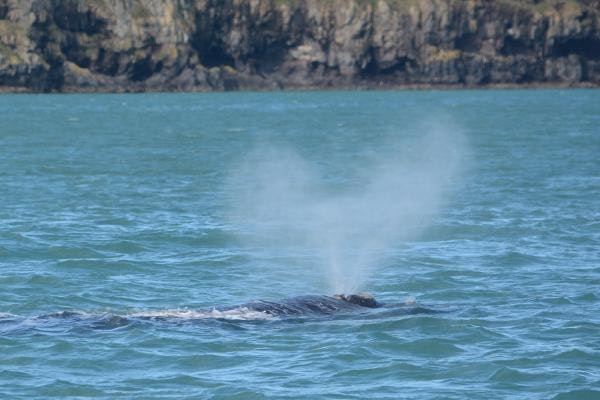 Life Cycle: Mating occurs in warm waters in winter. With gestation lasting for about 11 months and weaning for about another year. Females are sexually mature at around eight years old with calving generally occurring regularly every three years.

Feeding Patterns: Dives can last up to an hour but are usually much shorter, feeding on planktonic crustaceans. They also forage using the ‘skim feeding’ technique, like the Humpback whale.

Migration: These are native migrants to New Zealand and are the only large baleen whales that can be seen from the beach. Mainly seen during the breeding season in winter and spring. 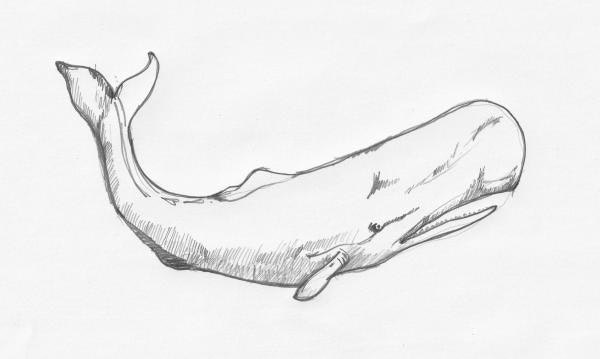 With a large, square-shaped head, making up around 1/3 of their body length. Females are smaller than males and have a proportionately smaller head.

Physical Traits: Wrinkly skin, the dorsal fin is shaped as a low hump. One, slit-like blowhole, situated on the top left side of the snout. Purplish-brown or dark grey in colour, with white underneath.

Other Characteristic: They have angled, bushy blows, which make them easy to spot. Although they rarely show much above the surface.

Feeding Patterns: Toothed whales that dive to great depths to feed, recorded to be deeper than 3000m, and have been known to last for over one hour. Although most dives tend to last around 35 minutes, extending down to 400m. They eat large organisms; mainly squids. However, male Sperm whales are also likely to eat demersal fish including sharks and rays. Research suggests that they feed using clicks, which can both locate and possibly stun their prey.

Migration: Found widespread all around the world but do have a patchy distribution. With a preference to deeper waters, they’re usually found offshore or in areas with submarine canyons. In New Zealand, Kaikōura is the go-to spot, where Sperm whales are found all year round. Overall, they generally move towards the poles in summer. Male distribution extends to more temperate latitudes, compared to females & juveniles.

Fun Fact: Sperm whales have the largest brain of any animal – up to 9kgs in weight.

We hope reading this will help you in your future whale spotting endeavours, but join us on our nature cruises in Akaroa to experience a trip of a lifetime to view the Hector’s dolphin, the rarest & smallest Oceanic Dolphin!

8 things which make our experience unique