COVID-19 UPDATE We are OPEN and OPERATING our cruises at ORANGE →
Select Language:

The life cycle of the female Hector’s dolphin 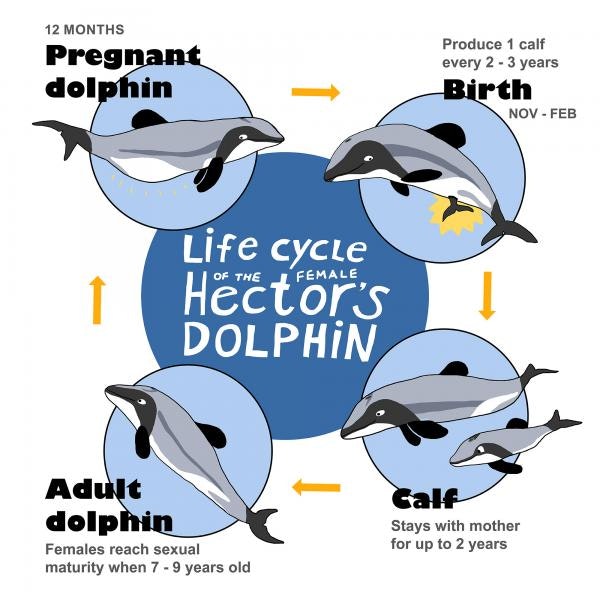 The Hector’s dolphin is pregnant for 12 months.

The Hector’s dolphin gives birth to 1 calf every 2 – 3 years around spring/summertime.

When the calf is born it stays with its mother for up to 2 years.

The female is sexually mature at the age of 7 – 9 years and can live up to 20 years. 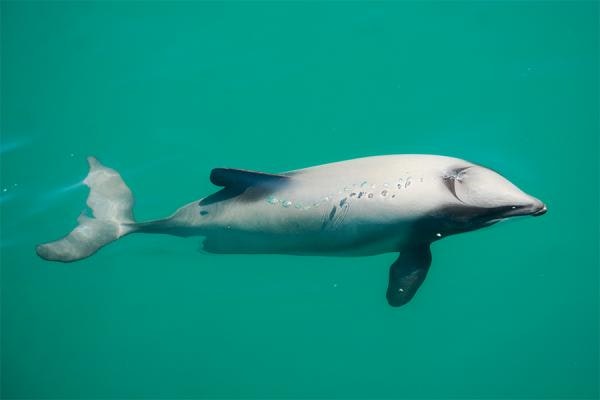 The Hector’s dolphins are one of the smallest and rarest dolphin species in the world, endemic only to New Zealand, and nationally endangered. Out of roughly 10,000, there’s about 1100 of them living around Banks Peninsula and Akaroa Harbour.

They are named after Sir James Hector, New Zealand's first government scientist and internationally renowned explorer and geologist, because he was the first man to examine the specie back in 1873. Their Maori name is “tutumairekurai”, meaning “special ocean dweller”.

The female is the largest, growing up to 1.4 m where the male is 1.2 m. They travel in pods of 5 – 40 dolphins and prefer shallow waters where its less than 100 m deep. They stay warm by having a 2 – 3 cm thick layer of “blubber” which is fat and oil under their skin. Besides their small size compared with other dolphin species, they are characterized by having a rounded black dorsal fin, and dark facial markings. 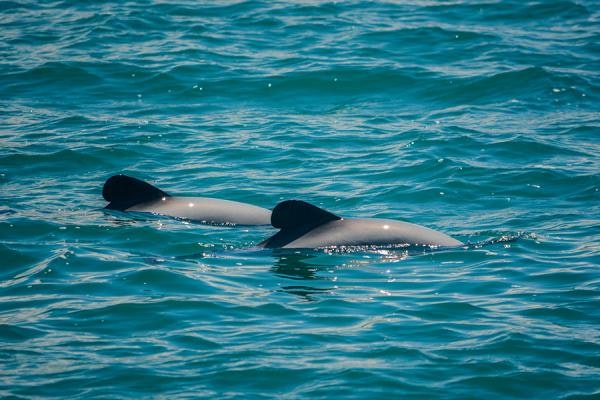 Dolphins have lungs like humans and other mammals, so they need to breathe, which they do through a blowhole on the top of their head, functioning like nostrils. When they dive underwater, they hold their breath. Hector’s dolphins got the nickname “puffing pigs” from the sailors back in the days, because of the sound the blowhole makes when they return to the surface. 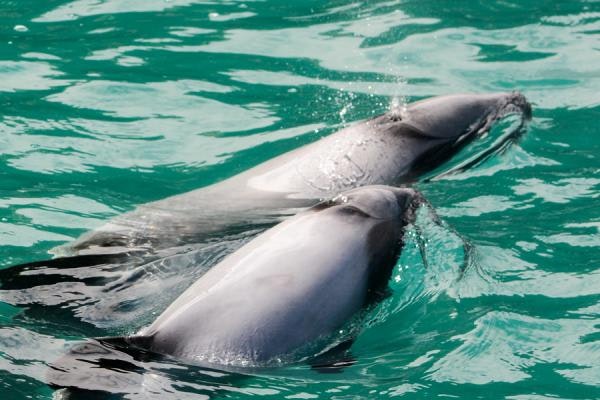 Their blowhole is on top of the dolphins head, functioning like nostrils

Despite having 12-20 pairs of teeth these dolphins don’t chew their food but prefer to swallow fish like flounder, red cod and mackerel, complementing the diet with crabs and squid. They eat 10% of their body weight a day, so if they weigh 40 kg they must eat 4 kg of small fish. Therefore they spend a lot of time out in the sea feeding, and that is when they don’t feel like interacting with boats or people. But if their stomachs are full, they love to play around the boats, riding the bow wave, swimming sideways, splashing their tales, jumping out of the water just enjoying – all with the purpose of having fun! 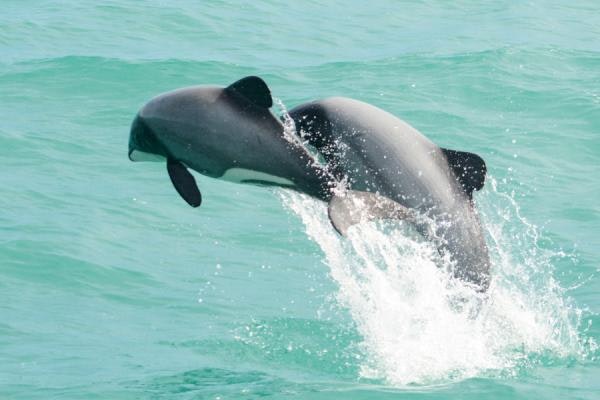 A mother and calf jumping for fun

The Hector’s dolphin was almost extinct when The Banks Peninsula Marine Mammal Sanctuary was established in 1988, to reduce set-net deaths of Hector’s dolphins in the Canterbury area. From there on there has been a slow increase in their numbers. Here at Akaroa Dolphins, we hold a Department of Conservation SMART (Sustainable Marine Mammal Actions in Recreation and Tourism) operator permit. In order to maintain this status, we must operate in a sensitive and responsible manner around dolphins, whales, and seals, to ensure we have minimal impact on the environment and wildlife.