Akaroa Dolphins was founded in 2004 by Hugh and Pip Waghorn. With daughter Julia and son George joining the family business in 2015. The team today consists of 12 dolphin and boating enthusiasts, as well as four dolphin-spotting dogs, who cannot wait to meet you and show you the beauty of Akaroa harbour! 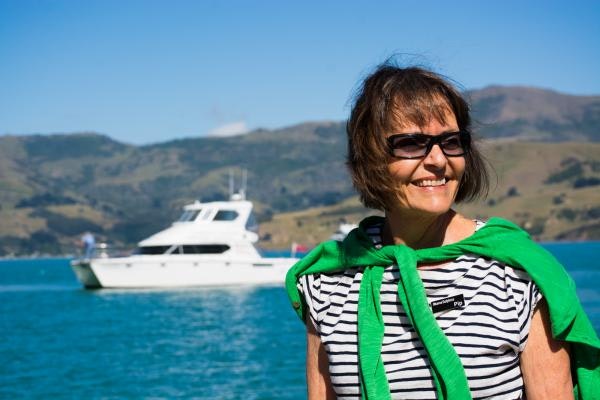 Pip Waghorn with 'Into the Blue' catamaran in the background.

Pip is a direct descendant from the first French ship that settled in Akaroa in 1838. She has lived her whole life on the peninsula and her French family name Le Lievre is a big part of the local history. In the early days, before Akaroa Dolphins was even a thought, husband Hugh was busy shearing sheep while Pip was busy being a school teacher. Today Hugh is busy watching cricket and rugby while Pip is busy doing everything that involves running the business. Look out for this caring woman, if you are lucky, she will hug you and tell you all about the town, the area, and their unique family history. 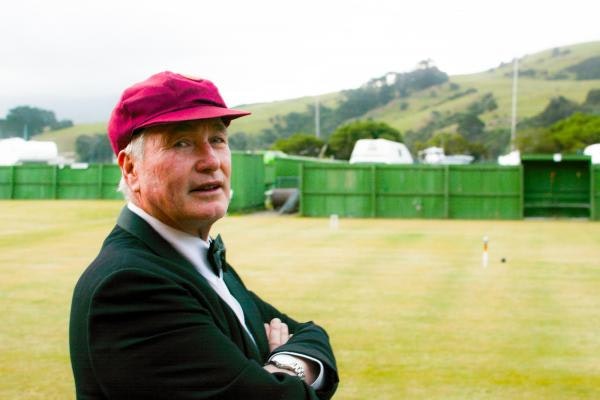 Hugh grew up in the small-town Darfield, a 45-minute drive from Christchurch. After travelling the world young Hugh found out that there is no better place to be than home, so he returned to the hills of Banks Peninsula where his family had been living for over a century. One day in a shearing shed he bumped into Pip and together they started life with family and farming – which many years later turned into a family and dolphin watching business. 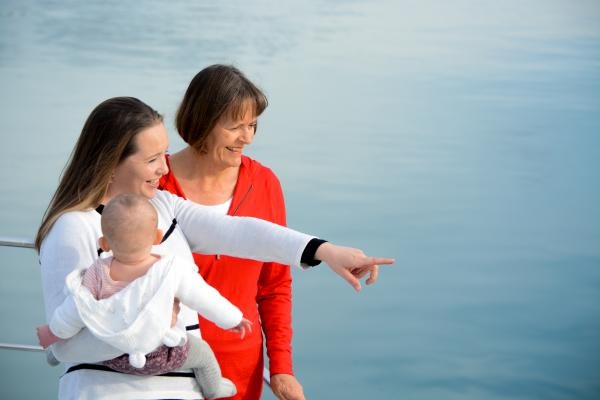 It was not on the cards that the son and daughter of Hugh and Pip Waghorn would join Akaroa Dolphins. Big sister Julia with a Bachelor of Design, majoring in visual communication, worked abroad for years in Sydney and London. From being very much a “big city girl” Julia is still some days surprised to find herself now enjoying the quiet family life in small-town Akaroa. While being the mother of two small girls, Julia has her skilled graphic design, marketing and social-media-understanding-fingers in everything that is going on behind the scenes in this family business. Maybe her quiet life in Akaroa is not so quiet after all… 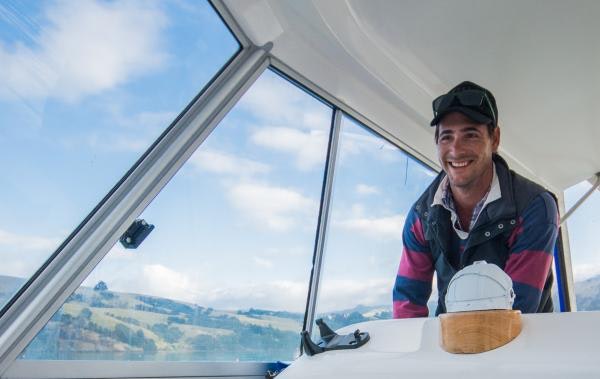 George at the helm, in his happy place.

There is not a problem that George cannot fix. He is the mastermind behind Akaroa Dolphin’s brand-new vessel 'Akaroa Dolphin' and main skipper. George spent 12 years in the outback of Australia, working on cattle stations and in mines before returning home to Akaroa. George reads the sea like normal people drink tea, fluent, and easy. You are in for a treat if boating with George, he is not short of dad-jokes and he will proudly tell you everything about the town, his family, and the wildlife in his backyard - Akaroa harbour. 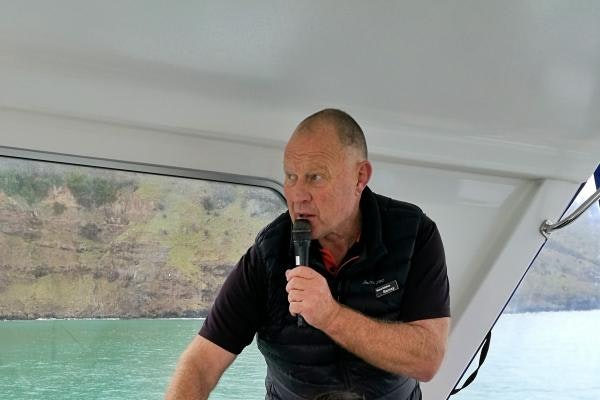 Bainzy, one of our legendary skippers.

Travelling, walking, eating is three of Bainzy’s favourite things. If you want to know about the local restaurants or walking tracks, he is the man to ask. Bainzy has been living in Akaroa for 15 years and before that he and his wife owned a restaurant in Darfield. Now it is mostly the 15 grandchildren that keep him occupied…! 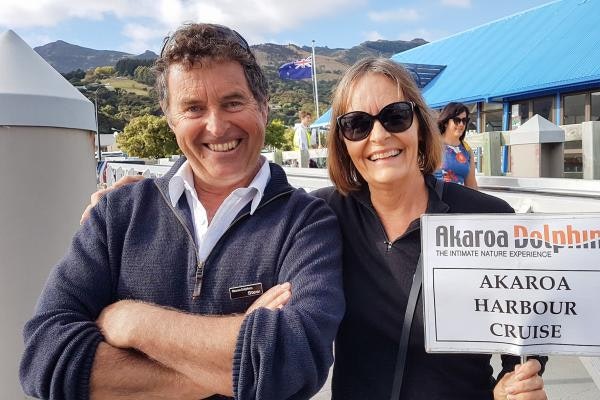 Stew on the left with Pip greeting passengers.

Stew was born on the peninsula and was a farmer for 35 years. He has been living in Akaroa for 11 years now. It is not only the curly hair that impresses, but Stew is also a man of many skills. He excels in fishing, hunting, and diving. Ask him anything about what beverage to enjoy with your seafood and you will not get a short answer. Not only a passionate hunter-gatherer but Stew and wife Joc run a cute wee Bed & Breakfast - Potter's Croft 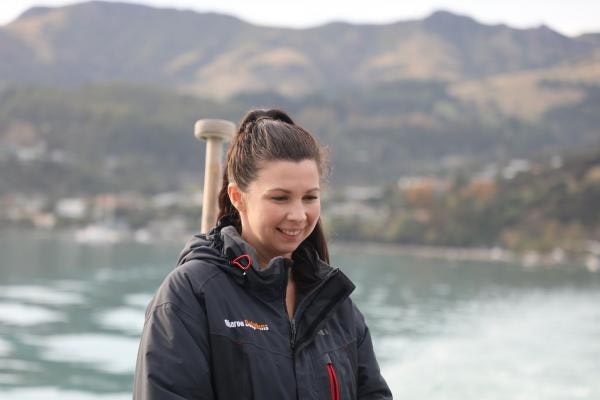 Nat one of our guides and superstar retail manager.

Nat is a local girl who left and came back, as many seem to do. Her 4th great grandad came from the Madeira Islands and founded 'The Madeira' - which is still a well-known hotel and pub in Akaroa. In school one of her favourite teachers was named Pip Waghorn. Her dad was a fisherman and his job took her around the seas of New Zealand. Today Nat is back with her roots, living in Le Bons Bay with her two daughters and husband who is also Portuguese descendant (FYI: different settler families). Life and people are connected in funny small ways. 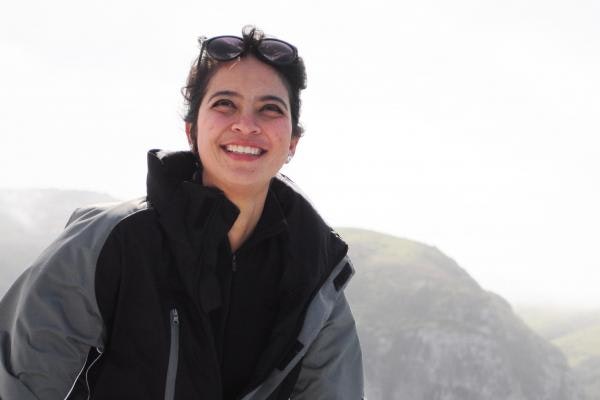 Aommy has been in Akaroa for 5 years and is originally from Thailand where she graduated in Interior Architecture from Bangkok. If you are cold when on the boat Aommy’s smile will warm you up, or our extra jackets will. Along with her impressive parenting skills for 3 alpaca boys, she is also an amazing photographer and you can see her lovely photos at @akaroadolphins and @aommy_photography_th 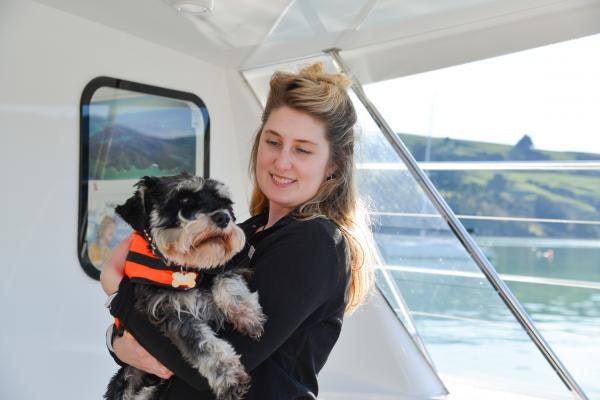 Emma and Buster one of our dolphin spotting dogs.

When Hugh was a kid, he had a best friend that he grew up with. Unfortunately, this guy left New Zealand (and Hugh) to travel the world. He never came back, he got stuck up north in a small country called Denmark. Now more than 40 years later this guy’s daughter is walking in the footsteps of her father. Emma is half Danish, half kiwi, with ancestors from Banks Peninsula. She recently joined the team at Akaroa Dolphins and has no intention of returning to Denmark anytime soon. Emma has a master’s degree in Visual Design and works also as an illustrator. You can see her work on the Akaroa Dolphins blog and @flatfly.studio. 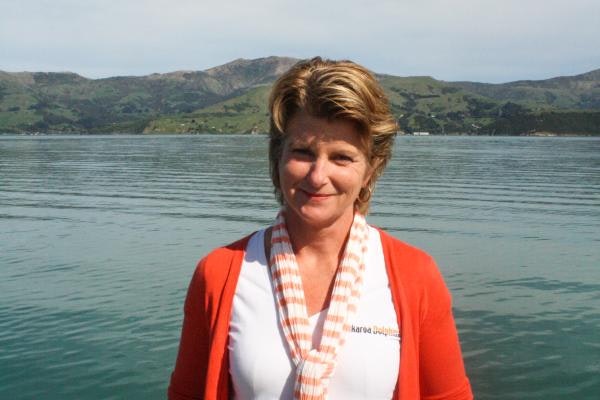 Dèsiree our the number one boat guide.

Even though Desi works other places during winter she is still part of the team and has been for more than 12 years now. She is a direct descendant of the first Polish settlers to the peninsula. The Koltowski family came to Akaroa in 1872. They left Hamburg, Germany and arrived in Lyttelton 102 days later. The Kotlowski’s have been neighbours to Le lievre's and Waghorn's ever since. Desi is the number one boat guide and not the smallest shoe mark or cookie crumb escapes her cleaning cloth. She will let you know where to stand and sit on the boat to make everybody as comfortable as possible. You will find her running up and down the stairs, joggling with cups and glasses, without the slightest sweat – she is a trained marathon runner as well as a chef. 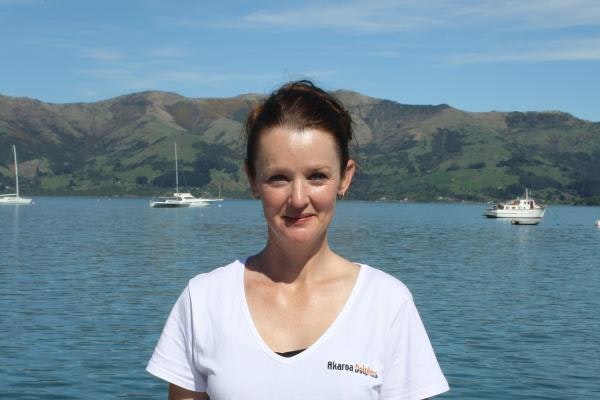 Tracy has been our rockstar backup team member, who has been working on a casual basis at Akaroa Dolphins for years. Originally from Christchurch, Tracy now enjoys farming life in the countryside with her husband and three kids, a 10-minute drive from Akaroa. Her background is in art and conservation and there is no end to her gentleness. You are in very safe hands when on the boat with Tracy.