WE ARE OPEN! New Zealand is at COVID-19 Alert Level 1.
Select Language:

Akaroa Dolphins has a 98% success rate in encountering Hector’s dolphins in their natural environment, all year round. Please see below for additional highlights you will see on our cruise. Please note, our cruise route can vary so if you would like to see something specific please let our team know.

Once an active volcano, Banks Peninsula is now extinct and made up of many bays and inlets formed by craters and lava flow. The largest inlet being the port town of Akaroa.  For 12 million years, Banks Peninsula was separated 50km from the South Island.  The last volcanic eruption in Akaroa harbour 6 million years ago caused the crater wall to breakthrough, and the Pacific Ocean flooded the crater. Erosion over time has formed the land which now attaches the Banks Peninsula to the mainland.

In 1770, Captain James Cook discovered the Banks Peninsula and thought it was an island. He named the island ‘Banks’ in honour of a member of his passionate crew of Botany, Joseph Banks.  It was only in 1809 that the Pegasus Captain Chase discovered that Banks Island was a peninsula. 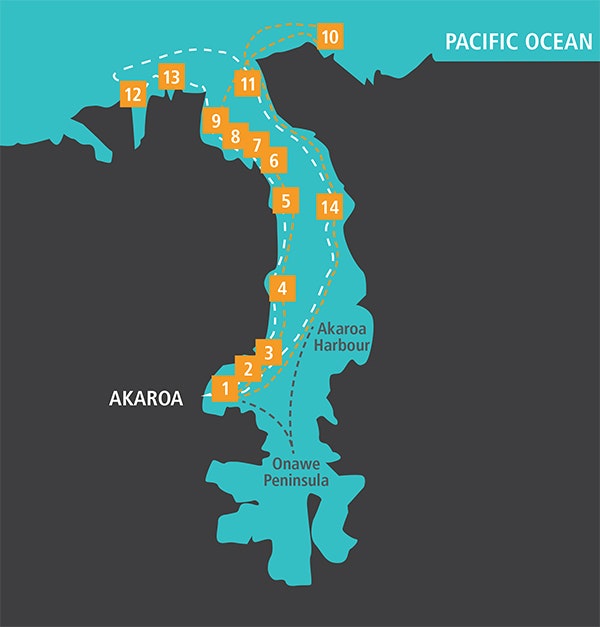 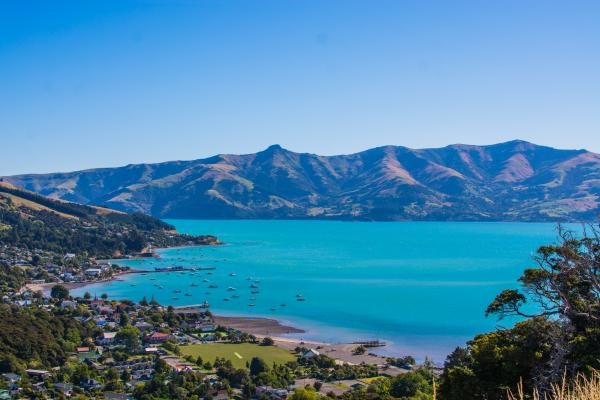 We start from the historic village of Akaroa, with its French influence due to the French whaler Captain Langlois arriving in Akaroa in 1838, where he hoped to make it a French base to then colonize the South Island of New Zealand from.  Langlois was under the belief that he had bought the Banks Peninsula from the local Maori, and returned to France and formed the Nanto–Bordelaise shipping Company.  He then returned back to the Banks Peninsula with French and German families aboard the ship ‘The Comte of Paris’.  When Captain Langlois arrived with the families in August 1840 though, the Treaty of Waitangi had already been signed between the English and the Maori. This treaty proclaimed British sovereignty over all of New Zealand, and so thus stopped the French from making it a French colony. 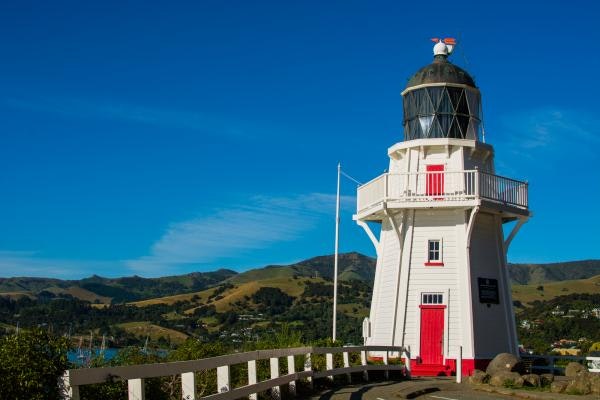 This historic lighthouse was originally located at the Akaroa harbour entrance and was moved into French Bay in 1980 after being replaced at Akaroa Head by an electronic lighthouse. 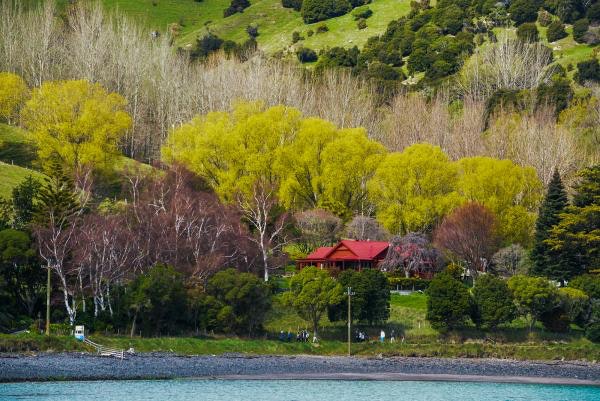 This site has huge historic, cultural and spiritual significance. Originally, around 300 Māori from the Ngāi Tahu iwi lived at Takapūneke / Red House Bay. The numbers diminished in1832 when chief Te Rapuha, a native North Island Māori, came to the village killing 64 of its members. He had come to avenge the death of his son killed a few years earlier by the Ngāi Tahu iwi. After this tragic event, this area eventually became sacred and the inhabitants of the village relocated to the village of Ōnuku. This is only part of the story, for more information visit https://my.christchurchcitylibraries.com/ti-kouka-whenua/takapuneke/ 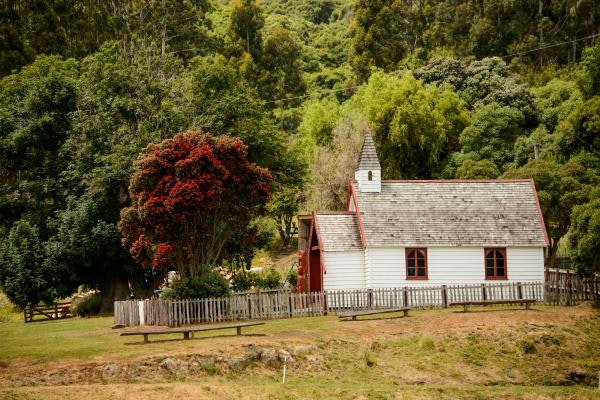 In 1840 the Treaty of Waitangi, the official document of New Zealand, was signed here by two Māori chiefs. Ōnuku is still home to some of the original families, and the meeting house is often used for gatherings and meetings. Ōnuku is the site to one of the oldest churches in the South Island. 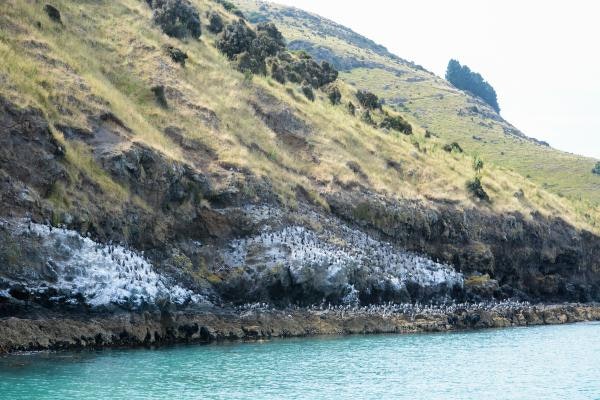 Shags also known as cormorants are different from other seabirds. They do not have oil in their feathers to keep them dry, so they must go to shore several times a day to dry out, otherwise, they get waterlogged and drown. Shag rock is perfect for this because it is in the sun most of the day – so you will often see this rocky sunny spot, filled with wing flapping shags, therefore the name Shag Rock. 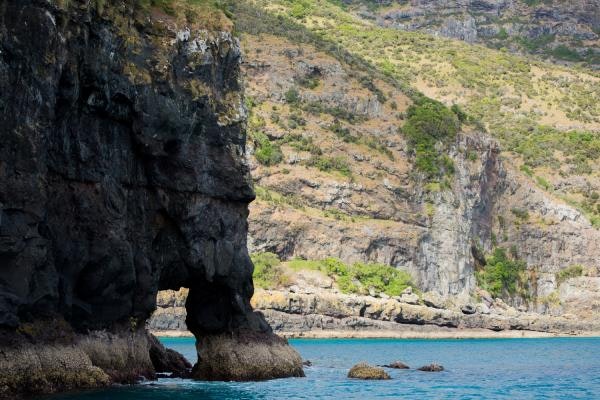 If you look closely, the rock looks like an elephant’s head. 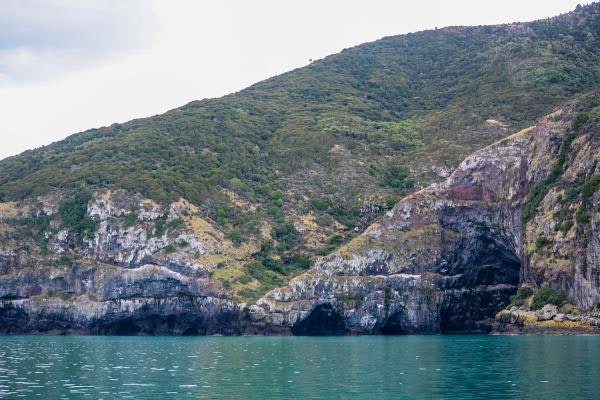 The cathedral was formed following a gas bubble from the volcanic lava flow, which exploded and therefore left a cellar. On the cliff face, the different layers of volcanic eruptions are visible, and also the different varieties of birds that have made ​​their nest on the cliffs. 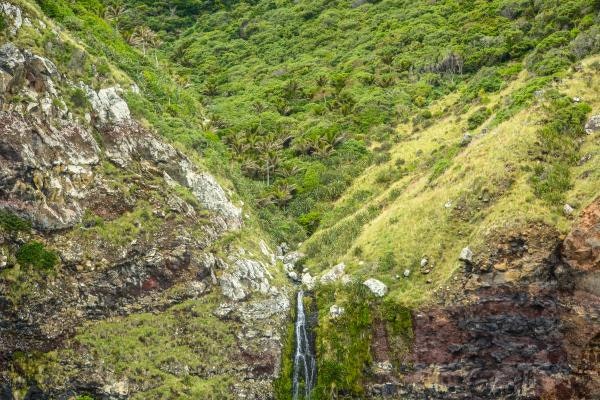 Also known as Paradise Bay, this is the most southern spot in the southern hemisphere where the Nikau palm trees grow (at 43 degrees south). The volcanic rocks trap a lot of heat, which forms its own kind of microclimate, perfect for this special nut-less palm trees. 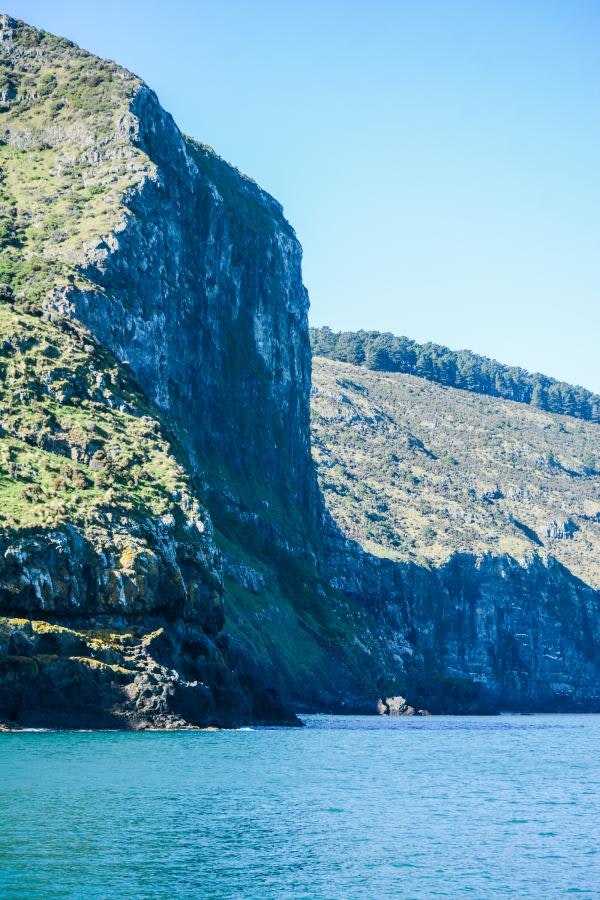 This is the largest cliff of the Banks Peninsula and is 270 meters in height. Local legend says, that Dan Rogers stole from a bank in Little River, and after a long period of being trailed on horseback by the police, was surrounded by fog at the top of the cliff, and whilst looking where the police were, Rodgers fell off the cliff, never to be seen again. 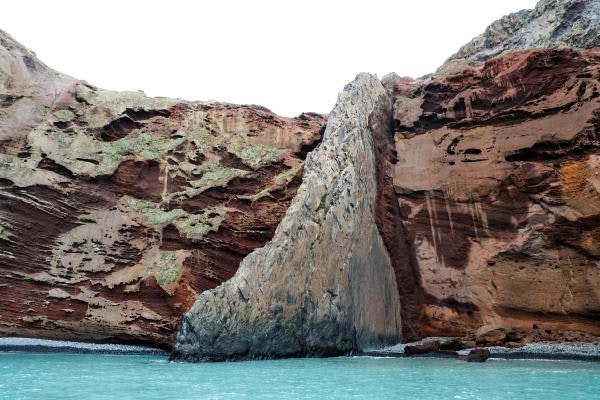 This volcanic amphitheatre contains a large grey knife-shaped rock, which is approximately 1 metre wide.  Formed by lava escaping through a spilt in the volcano wall, this is one of the finest examples of a volcanic dyke in New Zealand. 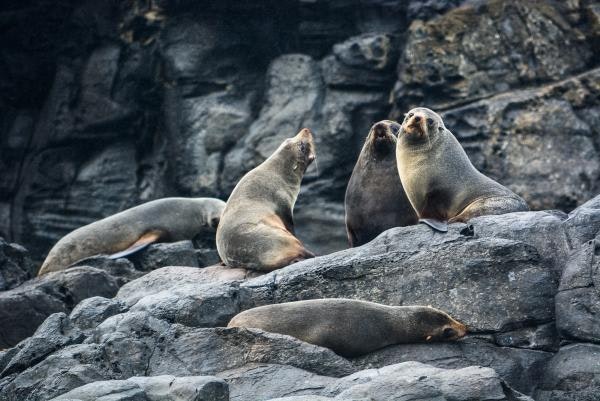 In the 1800s, the New Zealand fur seals were hunted almost to the point of extinction for their fur and blubber.  Since being protected around 100 years ago though, their numbers have risen to around 100,000 in New Zealand, and a similar number in Australia.

New Zealand fur seals are slightly different from other seals, as they have ears and hind flippers that rotate forward.  Like other seals though, they also have a pointy nose and long whiskers.

Fur seals have two layers of fur, which is so dense that one small piece can cover a dog a similar size to a Labrador. The colour of their fur coats allows seals to camouflage among the rocks very easily.

Fur seals can quickly plunge under the water at a speed of 50 km/hour and up to 200m deep. This enables them to hunt and feed on the likes of squid, octopus, and on fish like barracuda, flounder, hagfish, lamprey, red cod, school shark, and many other species. 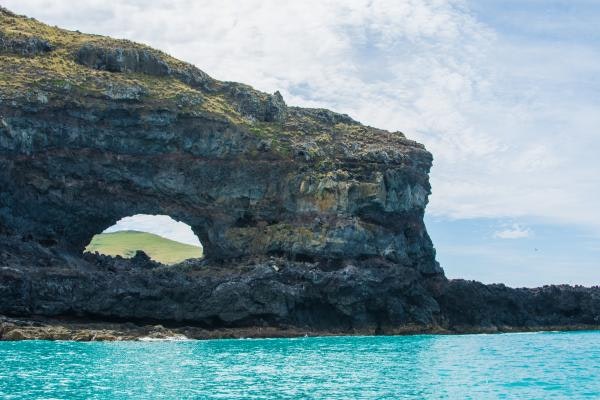 This bay is named after the Haylock family that used to own the land. It is where the original lighthouse was transported in and build on the sight a hundred years ago. Today it is part of the marine reserve and home for a New Zealand fur seal colony. From here you can also see the big hole in the rock called “The Spyglass”, through which you can catch sight of the new lighthouse. 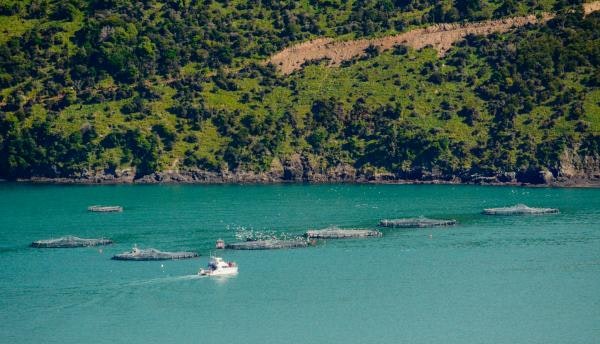 The Akaroa Salmon farm has been in operation since 1984 and produces around 160 tonnes of salmon per year. The sea-reared salmon is renowned for its superior taste, texture, and consistency over freshwater salmon. In this farm, no antibiotics are used, and the salmon is harvested up to 6 times a week.